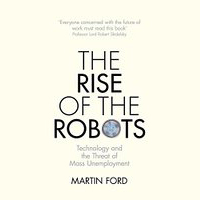 The Rise of the Robots: Technology and the Threat of Mass Unemployment

by Martin Ford won the Financial Times Business Book of the Year Award in 2015.

In this book, Martin Ford explains how computers can now work things out for themselves, proceeding by trial and error to develop their own programs according to their needs – in “a process of Darwinian natural selection”. They also take a scientific interest in the world around them, so that we now have computers that, in Ford’s words, have “progressed beyond the control – and even comprehension” of the humans who designed them.

Thanks to vast increases in dexterity and the ability to see in three dimensions, modern robots can cook and serve fast food; pick fruit, carefully distinguishing between the ripe and unripe; keep control of huge inventories and stack shelves accordingly. But “the machines are coming for the high-wage, high-skill jobs as well,” Ford says. Since 2000, the number of financial workers on Wall Street has fallen by 50,000 – around a third – as high-frequency trading programmes complete 100,000 transactions in a 10th of a second, while simultaneously seeking to mislead their electronic competitors. Now, according to Ford, “nearly any white-collar job that involves sitting in front of a computer manipulating information” is under threat.

Which legal firm would pay its juniors to sift through hundreds of documents when a computer can absorb millions in a few seconds? Who will trust their doctor’s diagnosis when a neat bit of software can instantly sift every medical article ever published? Worse still, computers can now turn facts into perfectly serviceable journalism. Emergent Artificial Intelligence already threats to replace brokers and Forex robots are widely popular even if their effectiveness is still being discussed.

In The Rise of the Robots, Ford details what machine intelligence and robotics can accomplish, and implores employers, scholars, and policymakers alike to face the implications. The past solutions to technological disruption, especially more training and education, aren’t going to work, and we must decide, now, whether the future will see broad-based prosperity or catastrophic levels of inequality and economic insecurity.

The consequent mass unemployment, needless to say, will lead to even greater inequality than the one suggested by the bestselling book by Thomas Piketty Capital in the Twenty-First Century

and he seems sure that, despite all those other premature warnings, this time computers really are poised for world domination.

The Rise of the Robots is essential reading for anyone who wants to understand what accelerating technology means for their own economic prospects—not to mention those of their children—as well as for society as a whole.