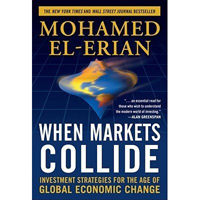 When Markets Collide: Investment Strategies for the Age of Global Economic Change by Mohamed El-Erian

won the Financial Times Business Book of the Year Award in 2008.

The author, Mohamed El-Erian has the global perspective of an Egyptian long resident in the US, whose area of greatest expertise is Latin America. His success, as an academic who came relatively late in life to fund management as the joint chief executive of Pimco, the giant fixed-income manager, gives him credibility.

That’s why Markets Collide, his attempt at explaining the forces that created the credit crisis, and making some prescriptions on how to survive it, understandably created so much interest. Mohamed El-Erian avoids polemical tones and over-simplification. From where he is sitting, the world looks complicated and he attempts to put the tectonic shifts into perspective. His title refers to several different “collisions”. The greatest collision is between the market of yesterday, centred around the US and based on an assumption that credit can continue to expand, and the markets of tomorrow, in which the centre of gravity has shifted to emerging markets and where many contradictions have been painfully resolved.

Perhaps surprisingly, he emerges as a sceptic on the alternative investment industry. He began to be so at Harvard, when many internal managers had defected to set up their own hedge funds. He rejected to “outsource” management to hedge funds: the costs of external managers would have been double but would not have shown up clearly on Harvard’s accounts.

For investors, key recommendations for surviving the next year involve allocating assets on the assumption that you will not be able to make any changes for the next three years. This forces a conservative mindset. He also calls for a new approach to choosing assets that starts with assessing the risks involved with each asset class, rather than the returns. He strongly recommends buying “tail insurance” – contracts that protect against the extreme market events now generally known as “black swans”.

The book is not an easy read and could have been condensed into fewer pages. It is also unclear whether it is aimed at the general reader or at specialists – the language can be rather technical for the former, while there may not be enough numbers for the latter.

It is difficult to quench the suspicion that it was rushed into publication with the onset of the credit crisis. But even though When Markets Collide has imperfections, Mr El-Erian’s insights are as valuable as ever.

The Rise of the Robots: Technology & the Threat of Mass Unemployment
Pre-suasion: A Revolutionary Way to Influence and Persuade by R. Cialdini
Scroll Up