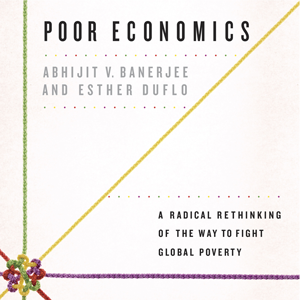 Poor Economics, A Radical Rethinking of the Way to Fight Global Poverty, by Esther Duflo and Abhijit Banerjee, won the Financial Times Business Book of the Year Award in 2011.

Having worked for more than 15 years with the poor in dozens of countries of all the continents, pioneering hundreds of randomized control trials with their lab, Esther Duflo and Abhijit Banerjee’s Poor Economics doesn’t just rethink the economics of poverty radically, it also offers entirely practical suggestions.

Poor Economics argues that so much of anti-poverty policy has failed over the years because of an inadequate understanding of poverty.

Living on 99 cents a day means you have limited access to information—newspapers, television, and books all cost money—and so you often just don’t know certain facts that the rest of the world takes as given, for example, that vaccines can stop your child from getting measles. It means living in a world whose institutions are not built for someone like you.

All this implies that making the most of their talent and securing their family’s future takes that much more skill, willpower, and commitment for the poor. And conversely, the small costs, the small barriers, and the small mistakes that most of us do not think twice about, loom large in the lives of those who have very little.

Poor Economics opens with the essential aspects of people’s family lives: what they buy; what they do about their children’s schooling, their own health, or that of their children or parents; how many children they choose to have; and so on. Then it goes on to describe how markets and institutions work for the poor: Can they borrow, save, insure themselves against the risks they face? What do governments do for them, and when do they fail them? Throughout, the book returns to the same basic questions. Are there ways for the poor to improve their lives, and what is preventing them from being able to do these things? Is it more the cost of getting started, or is it easy to get started but harder to continue? What makes it costly? Do people sense the nature of the benefits? If not, what makes it hard for them to learn them?

Poor Economics helps us understand, for example,  why the poor often end up with health care that does them more harm than good; why children of the poor can go to school year after year and not learn anything; and it reveals why so many magic bullets of yesterday have ended up as today’s failed ideas. The book also tells a lot about where hope lies: why token subsidies might have more than token effects; how to better market insurance; why less may be more in education; why good jobs matter for growth. Above all, it makes clear why hope is vital and knowledge critical, why we have to keep on trying even when the challenge looks overwhelming. Success isn’t always as far away as it looks.

Lords of Finance: The Bankers Who Broke the World by Liaquat Ahamed
The Rise of the Robots: Technology & the Threat of Mass Unemployment
Scroll Up