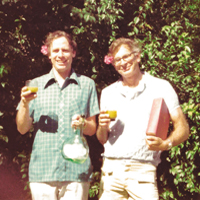 The Undoing Project: A Friendship that Changed the World

by Michael Lewis shows the way the friendship between the two gifted young psychology professors Daniel Kahneman and Amos Tversky laid the foundations of what we now call behavioural economics.

Their ideas are everywhere; it’s almost impossible to find a book in the “smart thinking” section of a bookshop that doesn’t cite Kahneman and Tversky: an irony since their work highlights many of the ways in which our thinking isn’t smart at all.

For example, they identified the “representativeness heuristic” — our tendency to make judgments by comparing an example to some mental model.

As an example, in The Undoing Project: A Friendship that Changed the World

, Michael Lewis introduces a seven-years-old Danny Kahneman, Paris-raised Jew whose family spending the war dodging the Nazis and their sympathisers, caught on the streets after curfew by an SS soldier. The man didn’t notice the yellow star under his sweater; instead, he hugged little Danny and, full of emotion, showed him a photograph of another young boy. Then he gave Danny some money and sent him on his way. “People were endlessly complicated and interesting,” Kahneman recalled.

Showing the ways in which the human mind errs, systematically, when forced to make judgments, Daniel Kahneman and Amos Tversky shed new light on how we make decisions.

Their ideas revolutionised everything from Big Data to medicine, from sport to finance, laying the foundations of what we now call behavioural economics.

Behavioural economics itself is not a major part of The Undoing Project: A Friendship that Changed the World

. While Tversky loved to have an intellectual foe to slay, it would diminish his work with Kahneman to define it merely as a takedown of textbook economics. By writing less about behavioural economics Lewis gives Kahneman and Tversky’s ideas room to breathe.

Despite the curiosity, drive, and iconoclastic talent each possessed, their moments of greatest crossover relevance came as a result of the involvement of the other. This could push the discussion into an examination of the importance of pairs in creativity, and Lewis follows what he calls a “love story” to the end, to the breakup of the two men. Once the closest of friends and collaborators, the reason for their breakup is at least as instructive as anything else Lewis could have chosen to focus on, and it makes a story full of poignancy.

Glenn C. Altschuler argued in the Pittsburgh Post-Gazette that The Undoing Project: A Friendship that Changed the World

Writing in The New Yorker, economists Cass Sunstein and Richard Thaler praised the The Undoing Project: A Friendship that Changed the World

‘s ability to explain complex concepts to lay readers as well as turn the biographies of Tversky and Kahneman into a page-turner: “He provides a basic primer on the research of Kahneman and Tversky, but almost in passing; what is of interest here is the collaboration between two scientists.”

Jennifer Senior of The New York Times wrote that “At its peak, the book combines intellectual rigour with complex portraiture. During its final pages, I was blinking back tears, hardly your typical reaction to a book about a pair of academic psychologists.”

Getting to Yes: Negotiating an agreement without giving in by Roger Fisher and William Ury
Best books to learn options trading strategies
Scroll Up