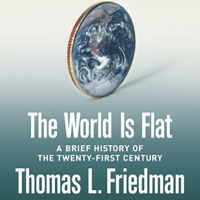 The World is Flat: A Brief History of the Twenty-First Century by Thomas L. Friedman, Pulitzer Prize-winning author, journalist, and New York Times op-ed contributor was the winner of the first edition of the Financial Times Business Book of the Year Award in 2005.

The World is Flat is an essential update on globalization, its discontents — and its successes. The lightning-swift advances in technology and communications put people all over the world in touch as never before — creating an explosion of wealth in India, China and elsewhere, turning eBay hobbyists sitting in their living rooms into prosperous international merchants…and challenging the rest of us to run even faster if we hope to keep pace.

The World is Flat by Thomas Friedman: the 10 Great Levellers

According to the author 10 types of Great Levellers operated (and keep operating), the flattening.

Supply chains, for example, are incredible flatteners: in order to work, they need to design very effective supply chain algorithms to create systems with customs offices around the world.  In some sense, Friedman claims that the world is a gigantic supply chain and terrorism is nothing more than a mutant supply chain. Here’s the entire list of the Great Levellers:

Financial Times & McKinsey Business Book of the Year Award 2017
Lords of Finance: The Bankers Who Broke the World by Liaquat Ahamed
Scroll Up