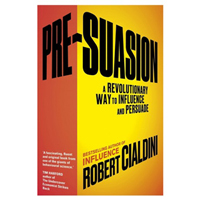 After a 30-year wait, the author of the legendary bestseller Influence: The Psychology of Persuasion

, social psychologist Robert Cialdini has written a sequel, Pre-Suasion: A Revolutionary Way to Influence and Persuade

Cialdini is recognized worldwide for his inspired field research on the psychology of influence. He is a New York Times bestselling author. His books, including Influence: The Psychology of Persuasion

, have sold more than three million copies in thirty-three languages.

As you might expect after the long wait, Pre-Suasion is packed with new research, tactics and insights. Here are a few of the ones that we found most surprising:

“The readiness is all” Hamlet would conclude, in Act 5 Scene 2. We’ll conclude that if you’re ready to pre-and persuade, it’s time for you to use this great skill with an equally great finance job!