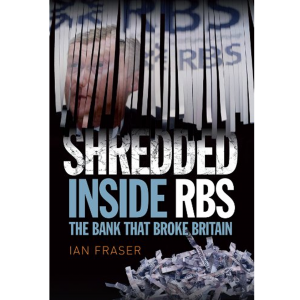 Ian Fraser has spotted stories, uncovered scandals and written about them in a detailed and accessible way. Introducing the definitive account of the Royal Bank of Scotland fiasco “Shredded: Inside RBS, the Bank That Broke Britain“.

Ian Fraser ‘s book is an engaging, if in some ways infuriating, tale of how self-serving bank executives systematically broke the rules, lent with astonishing recklessness, abused customers and got suckered by Wall Street – before ultimately dumping their mess on taxpayers.

At its zenith, the Royal Bank of Scotland was the world’s biggest bank. It had assets of $3 trillion, employed over 200,000 people, had branches on every high street and was admired and trusted by millions of borrowers and investors. Now the mere mention of its name causes anger and resentment, and its former CEO, Fred Goodwin, is reviled as one of the architects of the worst financial crisis since 1929. In Shredded: Inside RBS, the Bank That Broke Britain

, Ian Fraser lifts the lid on the catastrophic mistakes that led the bank to the brink of collapse, scrutinizing the role played by RBS’s directors, who failed to check Goodwin’s hubris, the colleagues who were overawed by his despotic leadership style, the politicians who created a regulatory free-for-all in which banks went virtually unsupervised, and the investors who egged Goodwin on. As more and more toxic details emerge about the bank’s pre- and post-bailout misconduct, which stretches from the ruination of numerous small businesses in the UK and Ireland to the criminal fiddling of Yen Libor, and from the alleged manipulation of global foreign-exchange markets to the wholesale ‘mis-selling’ of US mortgage bonds, Ian Fraser examines what the future holds for RBS and whether it can ever regain the public’s trust.

Ian Fraser has taken on the difficult task of analysing a complex subject and has done it well, including obtaining information from well-informed sources. Whilst the subject makes for dismal reading when one recognises that it is fact not fiction and that we are all bearing the consequences of the banking crisis still, it is an important subject to be understood and Shredded will make a significant contribution to the understanding for layperson and expert alike. Ian Fraser has marshalled a mass of information to allow the reader to understand the connected nature of the misconduct, poor regulation, misguidedness and sheer recklessness that prevailed for more than a decade, with limited understanding, except with hindsight, of the disastrous consequences of inflated values, stretched balance sheets and poor quality business. Sadly, as Ian Fraser points out, there are still unresolved issues in the banking sector, not least reconciling between deposit taking and lending institutions when combined with proprietary trading and risk taking institutions, and one wonders whether the lessons have really been learned. Reading Ian Fraser’s excellent book will help those still trying to blame it all on globalisation and forces of nature, rather than human folly and greed, to recognise that markets go up and down but borrowing needs to be repaid regardless or we are all losers, as has been the case with taxpayer bailouts to meet the horrific losses of certain banks post 2007, with RBS leading the charge to the bottom.

‘Shredded: Inside RBS, the Bank That Broke Britain

is a magnificent book. I regard it as one of the best investigative books of the past decade’ — Eamonn O’Neill, BBC Radio Scotland

‘A gripping account . . . RBS was a rogue business, operating in what had become a rogue industry, with the connivance of government. Read it and weep’ — Martin Wolf, Financial Times

‘Combines Greek tragedy with real-life events that have affected us all. It’s hard to put down’ — Devraj Ray, Mortgage Strategy

‘Shredded: Inside RBS, the Bank That Broke Britain

is a monumental book, well written, impeccably researched and hard to put down at any point’ —Financial Times

‘Not just a book about RBS but about something profound that happened ethically in our country’ –Russell Napier, CLSA

Belfort Sales Secrets: How to Sell like the Wolf of Wall Street
A Random Walk Down Wall Street: our review
Scroll Up