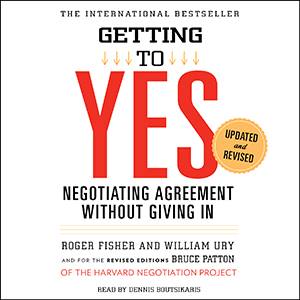 Getting to Yes: Negotiating an agreement without giving in

by Roger Fisher and William Ury was released all the way back in 1981 and has become an absolute must-have for any novice inquisitive about the art and science of negotiation.

Despite its age, the book still remains relevant in today’s industry, but it must be noted that negotiation theory has altered over recent years thanks to technology and general practice. This has evidently resulted in negotiation writers challenging parts of Fisher and Ury’s advice, reminding readers of the constant evolution of the negotiation process.

At first glance, you’d be forgiven for assuming it’s a light read – in fact, because of how easy it is to understand, you could easily get through the entire book in a few hours. However, the four main principles mentioned within show that negotiation is much more complex than we see at face value. Unlike other negotiation books, Fisher and Ury’s champion “principled” negotiating – negotiating based on each party’s desires, opposing the position mentality that is still ever-present within today’s negotiating culture.

The book makes for a fantastic go-to guidebook for every negotiator and its content can be applied to everyday life. We’re all guilty of becoming comfortable with something and gradually developing bad habits, so Getting to Yes can be used to remind of the basic negotiation principles, techniques, and steps which can easily leave the back of a negotiators mind.

Getting to Yes: Negotiating an agreement without giving in

takes numerous real world examples and explains the negotiation process for different scenarios in a clear, accessible and concise manner that a complete negotiation newbie will grasp. While it may not leave you thinking ‘whoa, I didn’t know that’, it’ll certainly simplify some elements of negotiation and allow you to hone and reframe some of the skills you already hold, molding you into a better negotiator.

The book concludes with the apt statement: “You knew it all the time. There is probably nothing in this book that you did not already know at some level of your experience.” And upon reading, this will likely resonate with you – that’s not to say you won’t have picked up on plenty of tips throughout.

Whether you’re a seasoned professional or at the very beginning, Getting to Yes: Negotiating an agreement without giving in

will prove a worthy addition to your book shelf.