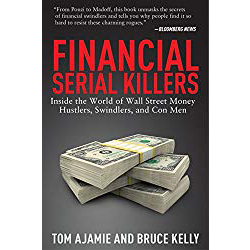 By using true tales of thieves, swindlers, and fraudsters at work, Financial Serial Killers: Inside the World of Wall Street Money Hustlers, Swindlers, and Con Men

illustrates how these perpetrators get their hooks into investors’ wallets, savings accounts, and portfolios—and never let go. The worst financial crisis since the great depression revealed that thousands of mom and pop investors had lost millions to so-called Mini-Madoffs. They are the thieves and con men who had used phony financial acumen to steal investors’ money, wipe out savings, and damage lives.

reveals the cons—from the grand to picayune—advisers cultivate with their victims—relationships that are essential to the fraud. Take the story of Lillian, the little old lady who invested with Warren Buffett, one of the richest men in the world. After her husband died, she thought her family’s treasure of $24 million in stock controlled by Buffett was safe. It was—until a family relative introduced the eighty-nine-year-old grandmother to a pair of unscrupulous insurance agents who convinced her to reinvest her savings in life insurance—decimating her nest egg while padding the agents’ pockets. Lillian’s story, as well as other accounts of deceit and fraud are the core of Financial Serial Killers. Readers will learn how to better protect their family’s wealth and savings after reading this book.

Ajamie, a top securities lawyer, and Kelly, news editor for Investment News, team up to recount true tales of financial frauds throughout history, which make for addictive if unsettling reading. Ajamie’s expertise in commercial litigation gives the reader an inside look at the complex strategies financial advisers, insurance agents, and even family members employ to fleece hapless individuals, focusing on the false emotional bonds con artists create with their victims in order to take advantage of them. For those who can wade through occasionally disjointed prose with some very jarring changes in tone, there are valuable lessons for readers who want to protect themselves from being swindled. In the wake of the Madoff scandal and the financial excesses that led to the last recession, this book will appeal to many readers whether they are part of the financial services industry or a victim of it.

“A new book on financial scams offers some insights – and lessons – on such scams, replete with stories of some of the biggest ever…. Unscrupulous insurance agents, stockbrokers and investment advisers all figure in a tour de force of the financial underworld, which also includes a long laundry list of warning signs and a tutorial on the use of Web tools to detect trouble.” – John McBeth, The Straits Times

“Ajamie and Kelly show us that the personalities, approaches, and techniques that swindlers use haven’t changed much over time; only their victims are different. This book could save you from becoming a victim of a ‘financial serial killer.’” – Ali Velshi, CNN Anchor & Chief Business Correspondent

“From Ponzi to Madoff, this book unmasks the secrets of financial swindlers and tells you why people find it so hard to resist these charming rogues.” – Chris Palmeri, Bloomberg News

“This book tells tales of financial deceit and fraud that we should all learn from. And who better to tell those tales than Tom Ajamie, a masterful lawyer who has battled on behalf of victims and recovered their life savings, restoring both their sense of dignity and financial stability. This is a timely and necessary book!” – Former New York Governor Eliot Spitzer

“The book is full of good advice to save you from financial fraud. You’re not too young or too old to read this book.” – Bookviews

Pre-suasion: A Revolutionary Way to Influence and Persuade by R. Cialdini
Scroll Up